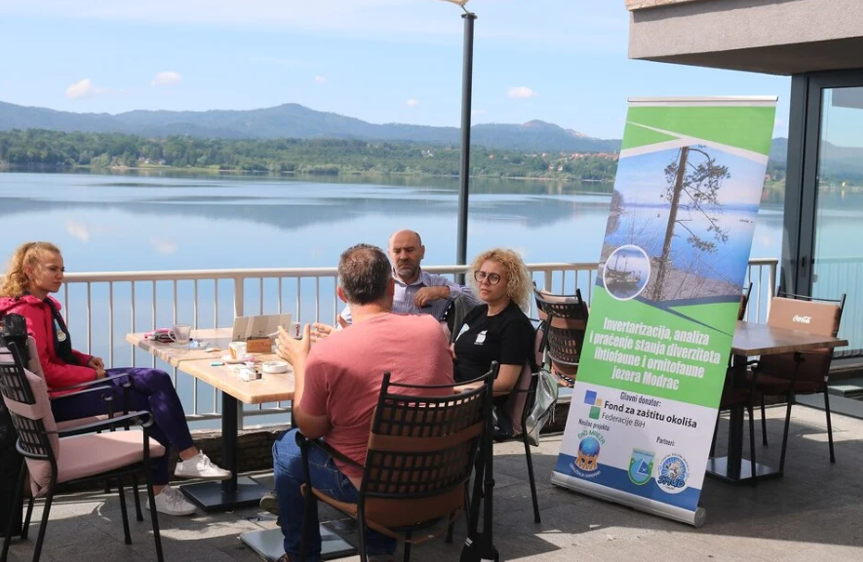 In June 2020, the Association of Citizens “Eco Network” in cooperation with the Municipality of Lukavac and Sports and Fishing Association “Smuđ” from Lukavac, began implementing the project “Inventory, analysis and monitoring of the diversity of ichthyofauna and ornithofauna of Lake Modrac”, funded by the Fund for the protection of the environment of the Federation of BiH. The aim of this research is to gain insight into the current state of species and populations of fish and birds in the area of ​​the hydro reservoir Modrac, as the largest reservoir in Bosnia and Herzegovina.

The project aims to analyze the diversity of birds and fish, in accordance with the methodology from the Annex to the Habitat and Bird Directive and the guidelines of the Guide to the habitat types of BiH.

After field and laboratory research related to the ichthyofauna of the Modrac hydroaccumulation planned by this project, a clearer picture of the current state of the fish population will be obtained, as well as more complete knowledge about the taxonomic biosystematics and ecological characteristics of the ichthyofauna of the investigated ecosystem.

The Modrac hydro-accumulation, as well as the nearby ponds and swamps, represent a significant habitat for the bird population. The very nature of the habitat, the diversity of the living world, primarily animals, which serve mainly as prey, and the proximity of the swamp in Šerići and the pond in Mosorovac have an impact on a number of bird species, including endemic species.

The occurrence of gray herons, gulls and swans probably also reflected the trend of changing bird diversity, which we will also determine with this study, as well as the current number of species and conditions of populations whose way of life is related to the coastal part, nesting birds and birds which are related to water, i.e. lake vegetation, as well as the current state of the number of species of ichthyophage birds and the state of birds in general.

Coming to complete results, we will have a more complete picture of the condition of these two groups of vertebrates, which are very important indicators of the state of the environment. In the future, the study results can be used as output data for even more extensive research or for comparison with future research.

Members of the project team are the following prominent experts from Bosnia and Herzegovina in the field of analysis of fish and birds: The project leader for the field of ichthyofauna is Dr. sc. Avdul Adrović as well as dr.sc. Elvira Hadžiahmetović – Jurida (Faculty of Science and Mathematics, University of Tuzla), and project manager for the field of ornithofauna mr. Nermina Sarajlić from Sarajevo. The leader of the team for biological research is a graduate biologist Menur Zukić, who will also have a master’s degree in biological research in Northeast Bosnia.

The project coordinator is, Aldin Hodžić, mr. European Studies, long-term associate and external consultant/associate of various areas of activity of interest to the wider community.

This project will popularize sport and amateur fishing as well as an increased number of researchers on Lake Modrac and expand the tourist offer of this area through the so-called birdwatching and other activities aimed at pointing out the importance of preserving the biodiversity of Lake Modrac.