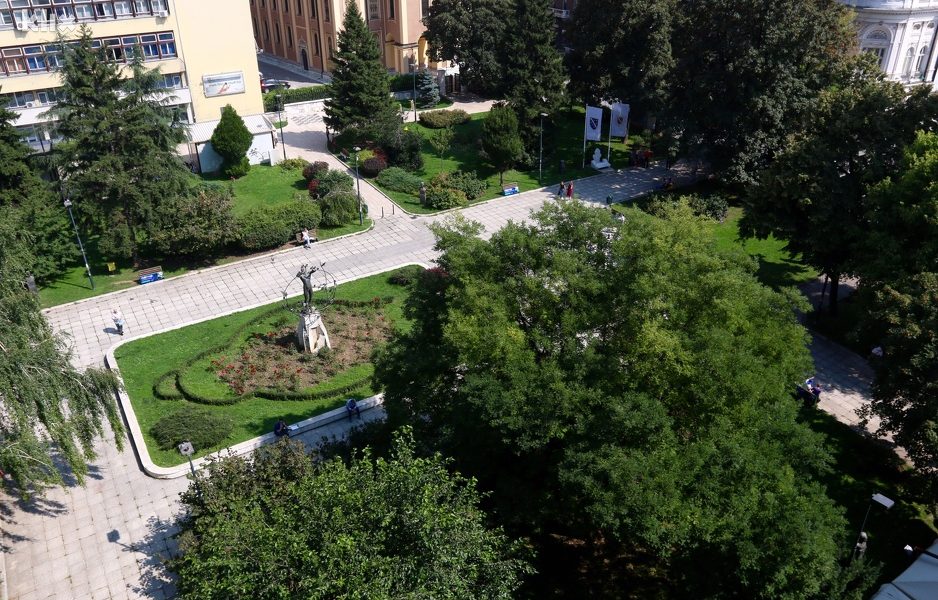 The Association of Landscape Architects of Bosnia and Herzegovina insists on preserving green areas in Sarajevo Liberation Square – Alija Izetbegović, where the Municipality of Stari Grad plans to build an underground garage. According to the Association, it is a green area that has been growing for almost 50 years. Referring to the documents, they claim that building something on that location was not planned before or that there would be any traffic in that area.

“According to the Urban Plan of the City of Sarajevo for the urban area of ​​Sarajevo for the period from 1986 to 2015 (Official Gazette of Sarajevo Canton, No. 5/99, 4/02 and 37/14), the Square is located in the zone of the City Center. However, its function is defined through a number of significantly older documents, primarily through the Urban Plan of the City from the 1960s, and it exists as such through a decades-long period representing part of the urban continuity. Its current form and function are the result of the project “Reconstruction of Liberation Square” from 1976, which treated this space through an architectural-landscape solution, made in the then City Institute for Urbanism, and the realization itself dates back to 1979. As such, it has been confirmed as one of the open, green spaces within the “City Pedestrian Zone Program”, which has not yet developed in its full capacity, but which as such should be protected from ad hoc activities in terms of new construction, introduction of traffic and the like. The Square confirms its function and position within the document Development Program of the City Center of Sarajevo (Official Gazette of Sarajevo Canton, No. 13/00), which does not provide for any change in status or content, and especially does not provide for an underground garage in the area,” said representatives of the Association.

They believe that the changes in the plans are not in accordance with the valid regulations, and they noted that there are several garages near this location and that more are planned to be built in the future.

“This document, in part 3 of the Development Concept, defines the items as: 3.1. General strategic commitments; 3.2. City surfaces; 3.3. The concept of spatial arrangement; 3.4. Quantitative optimizations include City Cores; and 3.5. Traffic – strategic commitments with appropriate graphs. Thus, in relation to paragraph 3.5. / graph 22 represents the Proposal – spatial layout, position and capacities of the planned garages, in accordance with the basic planning commitment to the protection of the space of the city center, with recommendations for planning these capacities around the city center. In this regard, we emphasize that the change of use of space is contrary to applicable regulations. Also, the following garages are available in the immediate vicinity: Garage Metalac – First Gymnasium capacity 440 parking spaces, Sirano capacity 220, Centrotrans 400 and Hrgićeva 200. Not even one of these does not have that value as the space of this Square”, said the Association of Landscape Architects.

It is indicative that all these documents were institutional, and even now they are in the competence of creation and adoption in the Development Planning Institute of the Sarajevo Canton. Consequently, it is not clear how in certain phases of drafting lower levels of spatial planning documents, as they pointed out, the previously set goals, strategies and contents of higher levels of spatial planning acts are disavowed, thus denying the basic principles of urban continuity.

They warned of the possible negative consequences of building a garage.

“If we focus on the repercussions that would arise from the introduction of underground, multi-storey parking space in the Square itself, we must be aware that traffic in Zelenih beretki Street would increase, and more cars would inevitably increase pollution, which would have a negative impact on the quality of the pedestrian zone itself. Those who do not believe in this statement should walk down this street in the afternoon,” they underlined.

They are aware that stationary traffic is a big problem not only in the Municipality of Stari Grad, but also in all other local communities. However, they reminded that the Old Town, as they assessed, lacks in the available space with all the restrictions on the protection of cultural and natural heritage sites.

“However, we believe that for these reasons, all elements of the complexity of the wider space must be taken into account, and that the development of one system must not be allowed, at the expense of another, which actually means insisting on respect for context and achieved urbanity,” they added.

According to the above, the construction intervention on the Square is not suitable for the Association.

“Given the aesthetics of this area, which is primarily determined by the green elements with the character of the open space of the square-park, and the sanitary-hygienic significance of a certain type and amount of greenery in the central part of the city, and the historical significance of the Square, we doubt the justification of interventions and permanent loss of the mentioned values. Therefore, we are especially sensitive to light micro-location actions of turning green areas into parking spaces and other construction works, which has become almost a regular practice in the post-war period, and most pronounced in recent years, and which is harmful to the urban identity of Sarajevo,” they warned.

They also referred to the conclusion of the Institute for the Protection of Cultural-Historical and Natural Heritage of Sarajevo Canton in the 2007 study.

“Trees whose age ranges between 35 and 60 years stand out in this park area. In addition to the age value, the trees also stand out with their habitus (canopy, flower, height), so that they are characterized by a significant landscape value “, it is stated.

They also reminded about the importance of green areas and trends in developed European cities.

“Today, there is a lot of talk about the importance of greenery, its benefits and benefits for cities and the population, there is talk about creating “green cities” and cities of comfortable living, but unfortunately we are witnessing that this practice is not implemented in our country. The tendency of all European and world cities is to move motor traffic and stationary traffic as much as possible from the central city zones and at the same time work on strengthening the city-public traffic, so we believe that such principles should be followed,” they said.

According to the Association of Landscape Architects, in addition to the continuity of treatment of this urban space – square in the above-mentioned planning acts, this is a kind of memory of the place inscribed in our mental maps and they simply do not want to give these images negative impact and rigid service such as stationary traffic.

“There is no city in Europe, especially a metropolis without a pedestrian zone, an oasis of rest, socialization, free movement, quality facilities, greenery, so we feel that we have a special responsibility to launch this initiative to save such spaces, which this city simply lacks,” the Association of Landscape Architects of Bosnia and Herzegovina concluded.

They stated their position in a letter sent to the Municipality of Stari Grad Sarajevo.