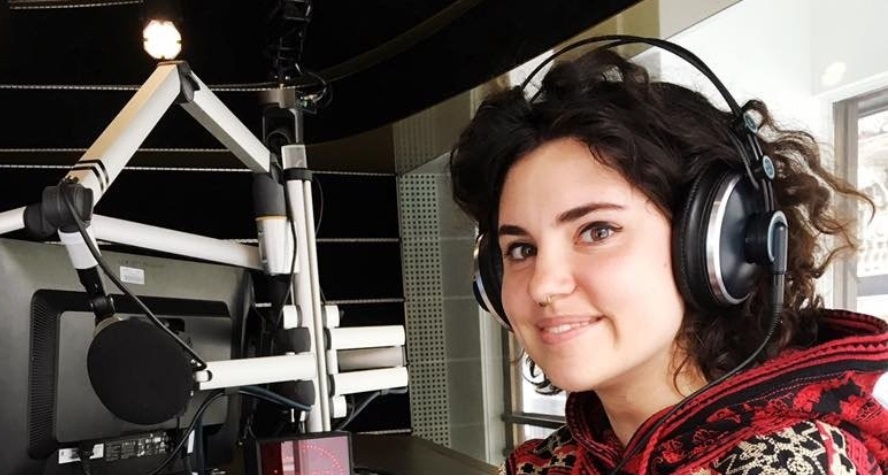 As a six-month-old baby, Sandra managed to leave Bosnia and Herzegovina (BiH). First, she lived in Tunisia for 4 years and went to Arab-French kindergarten. Today, she lives and works in the Czech Republic. She is one of the most famous bloggers both in the Czech Republic and in neighboring countries.

She has visited about fifty countries around the world, and she writes about her experiences. Her last adventure was in Uganda, where she made a movie about the problems with the water supply in Uganda, but also about the people living there.

Sandra works for international/French business media Welcome to the Jungle.

The Czech Television documentary #SandraUganda was made as part of the Czech Journal series, a combination of stories from Uganda, as well as Sandra’s experience of traveling around the world and leaving BiH.

Two days ago, Sandra had an extensive interview with the weekly “Reflex”, where she talked about her adventures, but also about the problems she faced during her education in the Czech Republic. The corona virus epidemic and its restrictions do not affect her at all.

Sandra says that now she can do other things he enjoys. For example, apartment renovation.

Sandra Kisić was born in Sarajevo just before the war. She does not remember leaving the country. She only knows it from the story her parents told her.

This is how she remembers leaving Sarajevo.

“I was born in Sarajevo four weeks before the war, in 1992. Given the situation, we decided to leave. Of course, it was not easy. My father worked as a chief of criminal police before the war. He quit his job in 1990 when nationalist political parties won the election, and he did not want to have anything to do with them. He opened a restaurant. “Two years later, the war started,” she said.

We spent half a year in Sarajevo, and her parents told her that she was in the bathtub all the time, because that’s how her parents protected her.

“You have walls on the bathtub, walls of the bathroom, walls of other rooms. There was constant shooting, every day, every night. I don’t know, today when I hear thunder outside, I get scared. After half a year, my mother and I went to Split, and my father had to stay because he was called to work in the police again. He had to work, but he tried to join us as soon as possible.”

He joined us very soon. Before coming to the Czech Republic, they lived in Tunisia. She attended a French-Arabic kindergarten.

Even today, Sandra does not think that she and her family should be referred to as refugees.

“My parents always told me we moved to the Czech Republic. We did not ask for any help, we really acted as if we had “moved” there. In the 1990s, everything was different, the tariff for electricity for foreigners was more expensive than for the Czech citizens, because that’s how it worked back then.”

Sandra believes that “refugee” is not an adequate term, not because of shame, but because the term is perceived as something pejorative. She thinks they the Czech people are often afraid of refugees.

In the movie, Sandra talks about the violence and harassment she went through in the Czech Republic.

At school, they called her a “Bosnian gypsy.” Sandra talks with her parents in her native language, even though she has lost the accent. She speaks Czech language without accent and no one can even guess she was not born in the Czech Republic.

In an interview for BUKA, she described an event from primary schools.

“When I was still in primary school, we attended a school in nature. The school lasted about five or six days, without parents. But the parents had to send us letters or postcards, to remind the kids not to forget their parents. My mom sent me a postcard the first day and she wrote it in my native language, she wrote me “my kitten, how are you, we are in Prague, I hope you are doing fine”. Since we were still learning how to read, we could not read the postcards. Teachers who attend the school with students read the letters, and they saw that my letter was not written in Czech. They started laughing, and they said that my parents don’t know Czech. Fortunately, there was one teacher who was “normal” and she saved me from further embarrassment. As we had the opportunity to call our parents, I talked with my mother. I cried and told her not to write in our native language, that I was ashamed and that they were laughing at me because my parents did not know Czech. Then my mother wrote a postcard in Czech. Since we have been living in the Czech Republic for two years, logically she did not know Czech perfectly, so the postcard was with spelling mistakes. It was even worse, because the teachers only laughed at that letter. Then I told my mother not to send the postcards at all “, said Kisić.

This and other events from the 1990s are mentioned in the documentary “Sandra in Uganda”, which will be shown on the Czech TV on November 17.

Today, things are better. Sandra is still facing hate speech and verbal attacks – through social networks. She sent us a few “screenshots” that she received after the published interview.

The most common sentence was: “The war has stopped, go home” …

“Now I am lucky to have normal, smart people around me. I am engaged to a Czech and I getting married in six months. Things are much better now. Sandra has been a Czech citizen for three years. They immediately changed my name to Kisičová, so I had to fill out a form that I wanted to use the “male form of the name” – I said what male form, that’s my last name. It lasted 3 months, but they decided to let my use my last name Kisić”, Sandra says.