Home The first “Merhamet’s” bakery opened in Tuzla, which will produce bread for 2,400 users of the “Imaret” Soup Kitchen 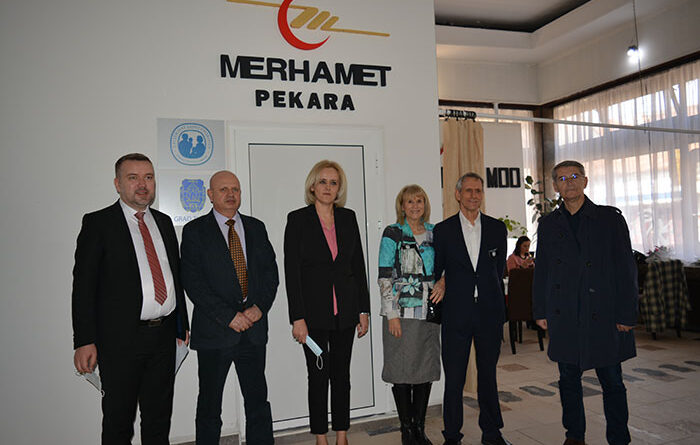 The first “Merhamet’s” bakery opened in Tuzla, which will produce bread for 2,400 users of the “Imaret” Soup Kitchen

TUZLA, February 24 – Today, the Muslim charity organization “Merhamet” opened its first bakery in Tuzla, within its Soup Kitchen “Imaret”, which operates under the auspices of the Regional Board “Merhamet” Tuzla.

A total of around 120,000 BAM was invested in the construction of “Merhamet’s” bakery. 91,475 BAM was provided by “Merhamet’s” partner organization “LDS Charities”, while the City of Tuzla, as a project partner, provided 30,000 BAM.

“Merhamet’s” Soup Kitchen in Tuzla is the largest soup kitchen in BiH and it feeds about 2,400 socially endangered families every day. The bread that will be produced in “Merhamet’s” bakery will be made for our users.

The president of HO “Merhamet” MDD, Kenan Vrbanjac, said that with today’s opening of its bakery in Tuzla, “Merhamet” started with the realization of another very important project.

– After Tuzla, “Merhamet” plans to open bakeries in other cities throughout BiH where we have our soup kitchens. We will transfer valuable experiences from Tuzla to our other regional committees – said Vrbanjac.

According to him, the timing of the opening of “Merhamet’s” bakery in Tuzla was not chosen by chance, because “Merhamet” marked its 108th anniversary with this opening.

– Considering that the work of “Merhamet” was renewed on February 2, 1991, and February is the month of “Merhamet”, all our regional committees these days, in their own way, mark the jubilee of “Merhamet” with various humanitarian actions – said Vrbanjac.

He expressed gratitude to the organization “LDS Charities” for this valuable donation, as well as the City of Tuzla and Mayor Jasmin Imamović for their support, but also for the continuous assistance to the Regional Board of “Merhamet” Tuzla.

The Mayor of Tuzla, Jasmin Imamović, congratulated “Merhamet” on the new project.

– Politics in the City of Tuzla is a politics of empathy. I would like as many citizens as possible to see how nicely decorated this space is, where “Merhamet’s” soup kitchen is. No one will be hungry in Tuzla. In partnership and cooperation with “Merhamet”, we achieved the goal that not one person in Tuzla is hungry. It is my pleasure to cooperate with “Merhamet”, with which the City of Tuzla will continue to cooperate in the future – said Imamović.

The representative of the organization “LDS Charities”, Mike Gojmarec, also expressed satisfaction with the cooperation with “Merhamet”.

– I am happy to see the fruits of our joint work today. I am very satisfied with “Merhamet” and the City of Tuzla and the Mayor Jasmin Imamović – said Gojmarec.

The director of the Regional Board of “Merhamet” Tuzla, Mensura Husanović, said that with the construction of the bakery, Tuzla’s “Merhamet” completed the process of preparing meals in the Soup Kitchen “Imaret”.

– This will, of course, bring a new quality to our users, socially disadvantaged citizens in the City of Tuzla, but also in Tuzla Canton. I invite donors to support the work of “Merhamet’s” bakery, primarily by donating flour – said Husanović.