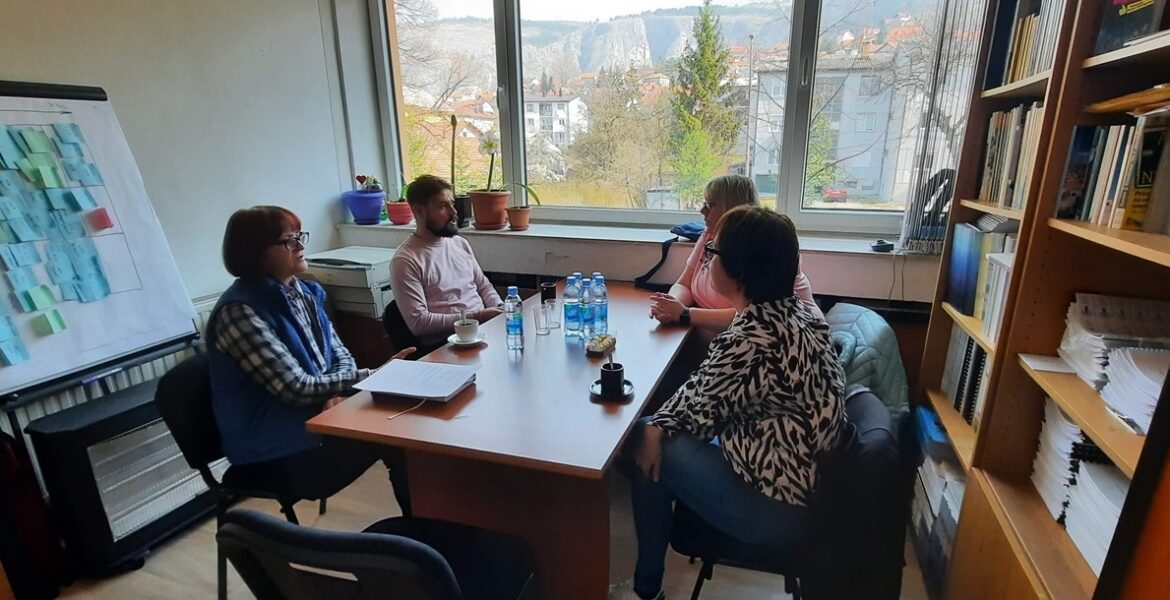 The Arbetarnas Bildningsförbund, abbreviated ABF, is a non-partisan and non-profit Association for Workers’ Education founded on November 16, 1912 in Sweden. Democracy, diversity, justice and equality are the foundations of their action, and they share values ​​with the labor movement. ABF has over 50 branches throughout Sweden and 300 member organizations.

Cooperation between ABF and the Center for Civic Cooperation was established through a learning process with the aim of exchanging good practices, knowledge and experiences. During the working visit, CGS informed the ABF representatives about the political, economic and social situation in Bosnia and Herzegovina, the situation in the field of human rights, the non-governmental sector and civil society, and especially the trade union and labor movement operating in Bosnia and Herzegovina.

Meeting in the premises of the Center for Civic Cooperation

In order to get to know each other better, the Center for Civic Cooperation organized a joint meeting with ABF representatives and members of the Mobile Team of the Coalition for Better Protection of Workers’ Rights, which operates within the project “Together for Workers’ Rights”.

Mariana Emanuelsson and Camilla Mörberg presented the work and structure of the Swedish Association for Workers’ Education: “The main task of ABF is to raise awareness of human rights and democracy, and our vision is a world and society free from all pressures and injustices.” ABF representatives emphasized that all workers need to be provided with education and the acquisition of new knowledge and skills.

Representatives of trade unions and members of the Mobile Team from Una-Sana Canton, Zehra Hadžić and Muhamed Mahmutović, Canton 10, Marko Žižić, West Herzegovina Canton, Vjekoslav Markota, Herzegovina-Neretva Canton, Edina Čomić, had the opportunity to meet guests from Sweden and exchange examples of good practice with them, but also the problems that workers and trade unions in Bosnia and Herzegovina face on a daily basis.

Zehra Hadžić, President of the Independent Trade Union of Primary Education of the Cantonal Committee of the USC, informed the audience about the situation in trade unions throughout Bosnia and Herzegovina. “The problems faced by workers in Bosnia and Herzegovina are numerous on a daily basis, mostly due to disunity and lack of solidarity between trade unions in the country. Trade unions, members and leadership must be encouraged and strengthened in order to restore the confidence of workers in the union and the fight for rights, and this is achieved by continuous education and attracting new members,” said Ms. Hadzic.

The Executive Director of the Center for Civic Cooperation, Zulka Baljak, expressed the importance of this cooperation for CGS, members of the Coalition, but also for BiH society, thanked the representatives of ABF for the opportunity to learn and announced further activities that CGS will implement with ABF.

The activity was implemented with the support of the International Olof Palme Center from Sweden.