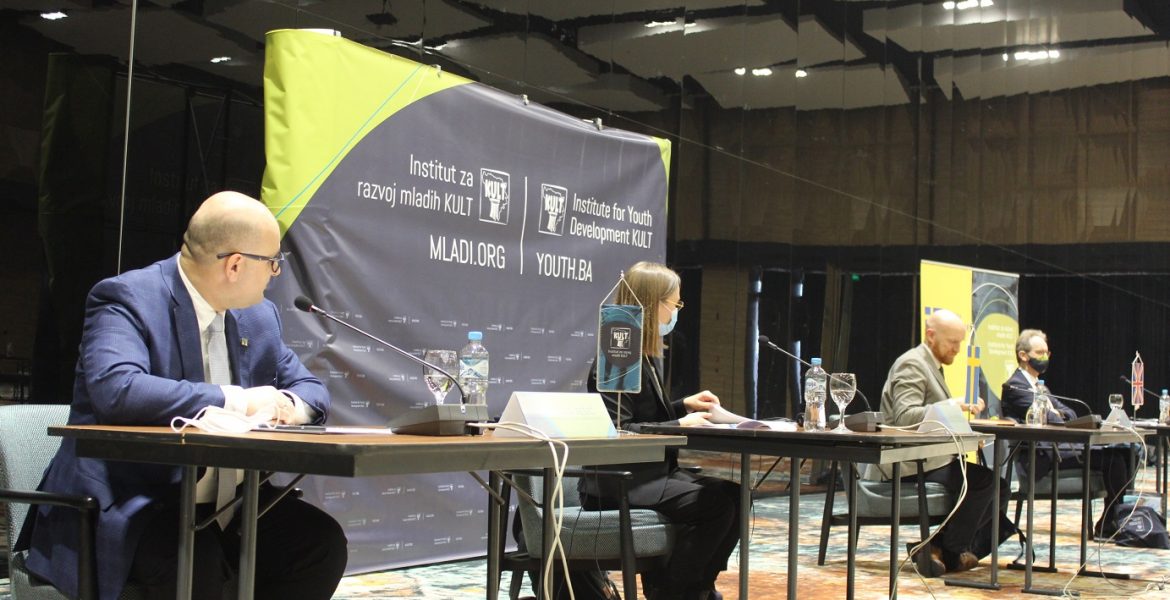 Today, representatives of the three embassies in Bosnia and Herzegovina (BiH) talked with 12 young politicians from 8 political parties, who are part of the local government in 11 communities in BiH. Young politicians were participants in the Training, Think and Act for Youth Political Leaders and UMiDp Leaders, organized by the Institute for Youth Development KULT in the last three years.

“The institute has been working for more than 18 years on creating a better environment for young people in BiH. For the same length of time, we create and conduct non-formal education trainings for different groups of young people and professionals who work with young people in accordance with their needs. A little more than three years ago, we launched a training for youth political leaders in BiH, and their results from the last elections best reflect the importance of the existence of such a training. We want to build a new generation of politicians who will know how to respond to the needs of young people. Our commitment is to continue with this training in the coming years,” said the Director General of the Institute, Mr. Jasmin Bešić.

A total of 63 young politicians from three generations participated in the UMiDp training, and in the last local elections 13 of them won mandates for municipal and city councils, i.e., municipal assemblies, and one participant won a mandate for mayor. All trainees at the time of attendance were under the age of 30 and came from 15 different political parties, from all parts of BiH. Their results in the last elections show the potential that young people have in the political process, but also the importance of non-formal education.

“Youth participation is the foundation of any democratic society, so the Swedish Embassy in BiH supports KULT and the informal education of young politicians. Youth representation in politics is key to finding sustainable solutions to the problems facing the state and communities. By participating in politics and election, young people bring important perspectives, advocate for rights and policies towards young people, and work on real change that is important to young people. The results of the last elections, where 13 young men and women politicians who participated in the training for young political leaders won seats in municipal and city councils, show the potential that young people have in political processes and the importance of non-formal education,” said Lisa Cumman, Second Secretary of the Swedish Embassy in BiH.

The Ambassador of the United Kingdom to BiH, H.E. Matt Field said that these young people are a good example for participation in local politics, even for communities in Britain, and noted that gender equality is very important and that it is necessary to increase the participation of women in political life in BiH.

The event was also attended by the Ambassador of the Kingdom of the Netherlands to BiH, H.E. Reinart Vos, who told young people that they should use the opportunity they have and protect the rule of law and political and electoral processes in the country.

Slavko Tešić was one of the participants in the first generation of UMiDp Training, and today he holds the position of the Mayor of Pelagićevo. Slavko says that the training helped him in his political engagement and the final winning of the mandate.

Participants in the training through three five-day modules have the opportunity to learn about the political system of BiH and activities in it, the development of political image and political advocacy and negotiation to solve the problems and needs of young people. The goal of the training is for young politicians to become the bearers of positive changes in BiH and an example of responsible politics. The support of the Institute during the implementation of the first three generations of training was provided by the Embassy of Sweden in BiH.