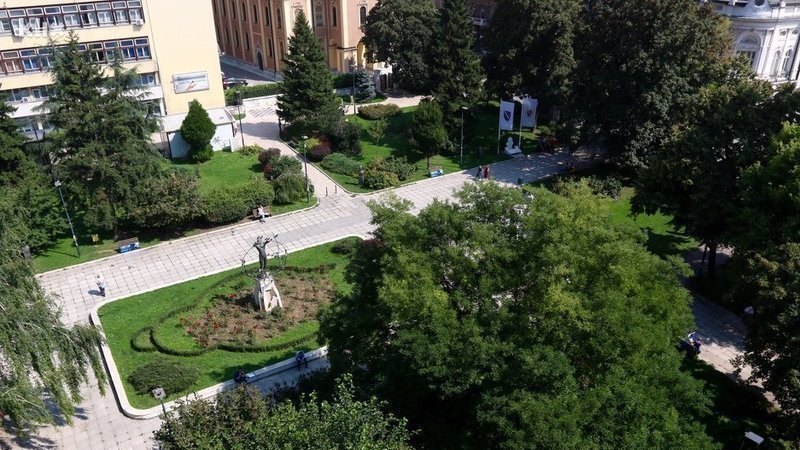 Based on the information on the adoption of the Decision on the development of the Urban Project “Trg oslobođenja – Alija Izetbegović/Liberation Square – Alija Izetbegović” as published on the website of the Municipality of Stari Grad on May 22, 2020, whose project program envisages the change of function of this open space and provides for the construction of underground structures, the “Association of Landscape Architects in Bosnia and Herzegovina” as a group of experts in the field of landscape architecture, architecture, urbanism and horticulture launches an initiative to preserve the green areas of ​​the Square that have been there for the last 50 years.

We are aware of the fact that parking, i.e., stationary traffic, is a big problem in all municipalities, especially in the municipality of Stari Grad, which is one of the most attractive in Sarajevo Canton, but also that it lacks in available space, with all the limitations of cultural and natural heritage protection. We believe that for these reasons, all elements of the complexity of the wider space must be taken into account, and that the development of one system, at the expense of another, must not be allowed, which actually means insisting on respect for context and achieved urbanity.

Given the aesthetics of this area, which is primarily determined by the green elements with the character of the open space of the Square-Park, the sanitary-hygienic significance of certain types and quantities of greenery in the central part of the city, and the historical significance of the Square, we doubt that the justification of interventions would lead to devastation and permanent loss of the mentioned values. Therefore, we are particularly sensitive to light micro-location actions, turning green areas into parking spaces and other construction works, which has become almost a regular practice in the post-war period, and most pronounced in recent years, which is harmful to the urban identity of Sarajevo.

To our knowledge, the Institute for the Protection of the Cultural, Historical and Natural Heritage of the Sarajevo Canton in the 2007 Study states the following: “Trees whose age ranges between 35 and 60 years stand out in this park area. In addition to the age value, the trees stand out with their habitus (canopy, flower, height), so that they are characterized by a significant landscape value.”

Today, everyone is talking about the importance of greenery, its benefits and benefits for cities and the population. Some countries are trying to make “green cities” and cities of comfortable living, but unfortunately, we are witnessing that this practice in our country is not implemented. The tendency of all European and world cities is to move motor traffic and stationary traffic as much as possible from the central city zones and at the same time work on strengthening the public transportation, and we believe that such principles should be followed in our country as well.

So, in addition to the continuity of treatment of this urban space-Square in the above-mentioned planning acts, this is a kind of memory of places inscribed in our mental maps and we simply do not want to give these images to a truly necessary but negative impact and rigid service such as stationary traffic. There is no city in Europe, especially a metropolis that does not have a pedestrian area, an oasis of rest, socialization, free movement, quality facilities, greenery, so we feel a special responsibility to launch this initiative to save such spaces, which this city simply lacks.