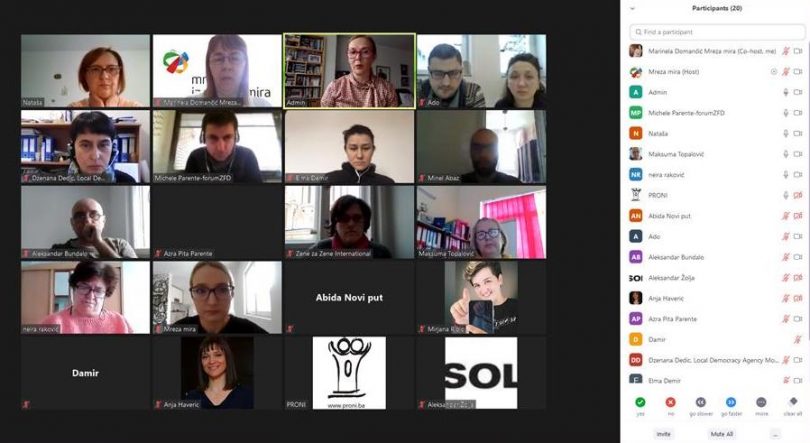 Despite the difficult events that have significantly affected the Network’s work in the past year – the death of its founder Goran Bubalo and the health crisis caused by the COVID-19 pandemic – the Network for Building Peace continues its activities and projects aimed at strengthening civil society in Bosnia and Herzegovina.

In order to strengthen internal organizational capacities, the Network conducted the process of electing new members and management of the Management Board, as well as the election of the President of the General Assembly.

The Commission for the Election of Members of the Management Board elected five new members, and the General Assembly confirmed their appointment:

Maksuma Topalović, representative of the UG Alternative Kakanj, was appointed President of the General Assembly.

The Report on the activities of the Network for Building Peace for 2020 was presented at the meeting, as well as the new Statute of the Network.

After the harmonization of official documents and formal processes, the date for the next meeting of the General Assembly was agreed, where the operational work plans for 2021 will be discussed.

5. Anja Haverić, candidate for a membership in the Steering Board of the Network for Building Peace

7. Damir Šačiragić, Words of Peace of BiH and the Association “Rosen Method Center”

The Network for Building Peace staff – list of participants:

1. Nataša Maksimović, President of the Network for Building Peace