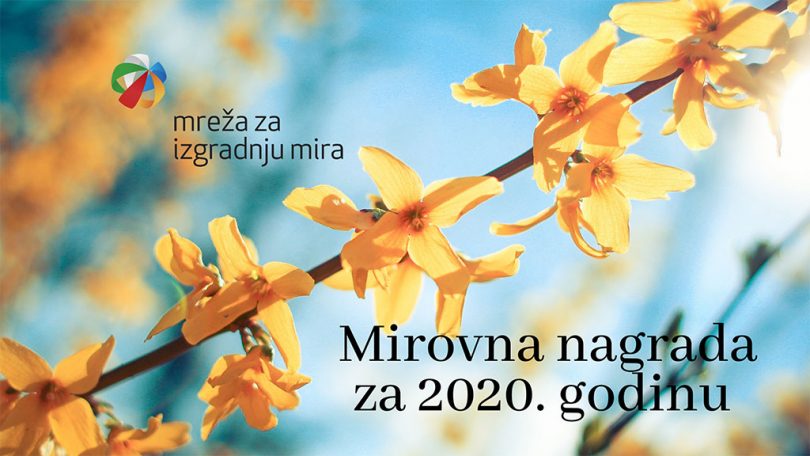 Call for nominations: „Network for Building Peace – Peace Award for 2020“

The Network for Building Peace has announced a call for nominations for the Peace Award. The Peace Award is given to individuals, but also to schools that, through their work and commitment, actively contribute to building peace and promoting human rights, especially human rights of vulnerable groups in our society. The purpose of the Peace Award is to point out and reward achievements in promoting tolerance, human rights and peacebuilding, but also to motivate everyone else to take this path. The emphasis is on what has been achieved in this field through the work of individuals and schools. The ultimate goal is to draw attention to the efforts and successes of individuals and schools that serve as role models and motivation for others to act in the areas of tolerance and peacebuilding. The award thus recognizes efficiency as well as vision.

The Peace Award of the Network for Building Peace was established in 2013 and is awarded to people who have made outstanding contributions to various areas of social life in achieving a peaceful and harmonious world, and who are working on the greatest challenges facing today’s society.

The Peace Award is awarded to people who stand for human rights and work to spread the principles of peace and solidarity in the world, who have made an outstanding contribution to international social justice and peace, and interreligious cooperation. The award is dedicated to the effective implementation of the principle of tolerance in the public and private spheres, especially in activities that contribute to peace building in the areas of human rights, arts, education, culture and science.

Since 2016, the Peace Award has also been awarded to schools that stand in the way of solidarity, human rights and peacebuilding. The Peace Award for Schools is given to primary or secondary schools in Bosnia and Herzegovina that excel in their work on peace education, human rights, solidarity and non-violence challenges, and participate in improving the lives of the local community. Schools are motivated to encourage and use the initiative of students in order to create a culture of peace and sustainable development, encouraging the whole society to learn and think about what each of us can do to improve our local communities and future.

The award ceremony is held on the International Human Rights Day, which is celebrated on December 10.

Anyone can nominate a person or school that they believe deserves the Peace Award for their work and commitment. Self-nomination is not allowed. However, schools are encouraged to submit their own Peace Award nominations themselves. The selection is made by a specially selected commission of the Network for Building Peace based on the applications received.

Applications have to be sent by e-mail to info@mreza-mira.net no later than Friday, November 23, 2020 until 16:00h. Applications submitted after the deadline will not be considered.

Time frame of the decision-making process

Criteria of the person nominating the candidate or school:

In addition to the application, it is necessary to submit evidence of the efforts, work and performance of the nominated individuals and schools (newspaper articles, interviews, activities…)

The members of the selection committee are:

Nataša Maksimović – President of the Network for Building Peace, Sarajevo

If you have any questions, feel free to contact us via email amela.ps@mreza-mira.net or phone number 061/102 725, contact person Amela Puljek Shank, Program Manager of the Association Network for Building Peace.

Thank you for your interest. We are looking forward to receiving your applications.