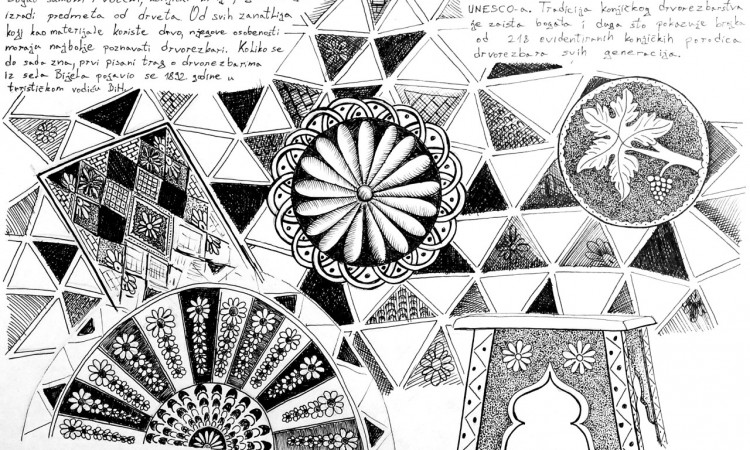 On Friday, January 22, the National University of Konjic (NUK) will present, using a drawing by academic graphic artist Dino Džumhur and a brief description, a national monument on its Facebook, Instagram and Viber social networks accounts – a collection of wood carvings in Konjic.

“Rich in forest and fruit, the equestrian area was conducive to making wooden objects. In preparing wood for processing, woodcarvers must necessarily know the techniques of drying the wood, gluing and joining the parts together, and finally, how the wood behaves when chiseling. Woodcarving is definitely the most important element of cultural and historical heritage in Konjic and the only element in the Federation of BiH that was included on the UNESCO list of intangible heritage of humanity on December 6, 2017,” said a representative of the Konjic National University.

The travel writer Heinrich Renner visited Konjic during 1885 and 1895, and wrote about Konjic, i.e., Konjic woodcarving, that “it is worth recommending a direct trip from Konjic to the valley Bijela. Very beautiful wooden carvings and devices are made there, especially those boxes in which the peasants store their clothes and more valuable things”.

The skill of woodcarving was brought to the equestrian region by immigrant farmers, woodcarvers from Herzegovina. At the end of the 19th century, the Austro-Hungarian government opened a course in woodcarving in Sarajevo, and later in Konjic, which, as they say, led to the development of woodcarving and the opening of the first workshops.

“Movable property – collections of woodcarving products in 2006 received the status of national monuments of Bosnia and Herzegovina. By the way, Konjic is the only place in BiH where woodcarving is developed, and the tradition of equestrian woodcarving is really rich and long, as shown by the number of 218 registered equestrian families of woodcarvers of all generations”, representative of the National University of Konjic emphasized.

They state that the common technique is woodcarving with a single chisel with a handle.

Equestrian woodcarvers use chisels without a cutting handle and chisels with a digging handle. Using both types of chisels, a relief is achieved, and the carving process consists of several stages, depending on the type of pattern and the effect to be achieved.

Drawing is the process by which the desired motif is transferred to a wooden base with a dry pencil using a ruler and sector. All the details of the future carved surface are not drawn, only the base lines.

Drawing or pounding is a technique of cutting a wooden base next to the outlined lines and is performed using metal chisels by striking a hammer on the vertical of the tool.

Digging is the deepening of the wooden base to the depth of the incision when painting, and by digitizing or decorating objects, equestrian woodcarvers most often used Bosnian, Arabic and deep patterns.

The deep pattern is the most difficult to process and here the individuality of the processor comes to the fore.