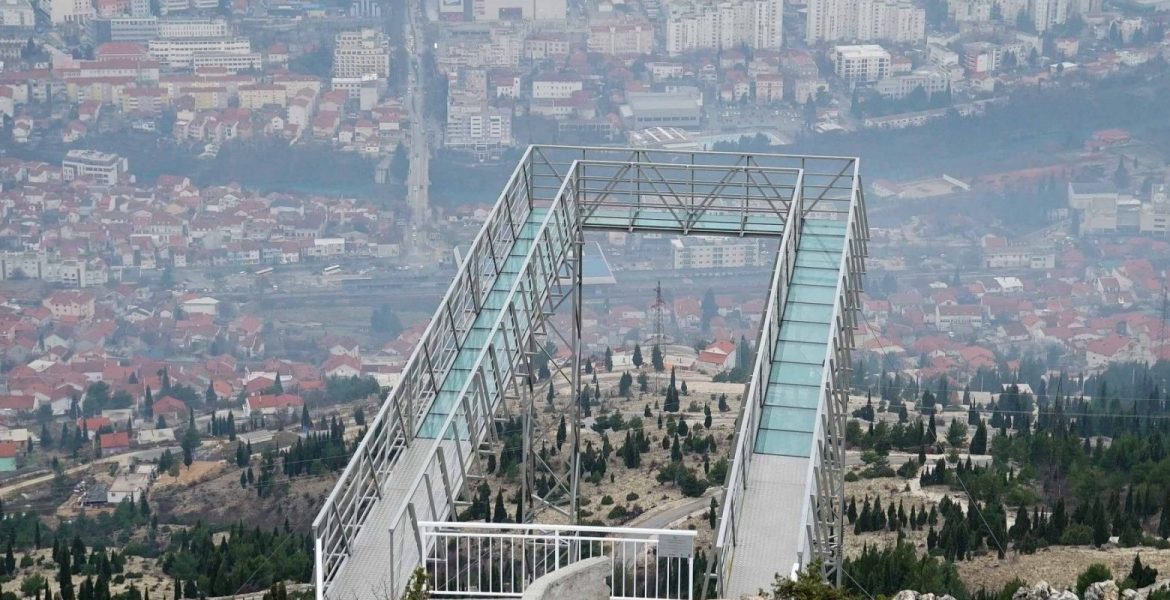 Skywalk at Fortica is a new tourist attraction of Mostar (VIDEO)

Skywalk at Fortica is a new tourist attraction of Mostar, whose official opening is expected in the spring of this year.

About 15 meters high above the slopes of Fortica, a walking space about 35 meters long, will enrich the tourist offer of the city on the Neretva River and provide completely new experiences to visitors.

The Mountaineering and Cycling Association MTBA from Mostar is the initiator of the Skywalk project, which followed a few years ago when they completed the project of arranging the park at Fortica within which a skywalk was built, the state flag was set, and the main attraction of the park is the 570 meters long Zip Line which offers a fantastic view of Mostar.

The “Skywalk” project worth about 40.000 BAM, was implemented by the United Nations Development Program in Bosnia and Herzegovina (UNDP BiH), with the financial support of the United States Agency for International Development (USAID BiH), the Agency for development cooperation of the Republic of Italy (AICS) and the City of Mostar. The contractor is HP Investing d.o.o. Mostar.

– “We have initiated a project with the desire to offer Mostar and tourists a new destination with a beautiful view of Mostar. The skywalk is an exciting way to experience this view from another perspective on Mostar,” said President of the MTBA Association Đani Rahimić in an interview with FENA.

He added that they hope that this year’s tourist season will be at full capacity.

– “We hope that we will be able to offer domestic and foreign tourists a new attraction and that they have some tourist attraction which will make them stay longer in Mostar, which is one of the ultimate goals of our project, and the entire tourist offer in the city,” said Rahimić.

The skywalk project has been implemented within the Via Dinarica project, it includes public tourist infrastructure, so that the entrance to the skywalk will not be charged.

– “Our Association got this site from the city of Mostar for use and we have committed ourselves to ensure the maintenance of the facility as part of our activities as we maintain other locations in the area that the City of Mostar has given us to use. We, as an Association, have initiated a series of activities on some of which revenues are generated, and these revenues are later directed to the maintenance and improvement of the entire infrastructure. It is envisaged as a long-term sustainable project for the long-term survival of the site, and always available to citizens and tourists,” concluded Rahimić.