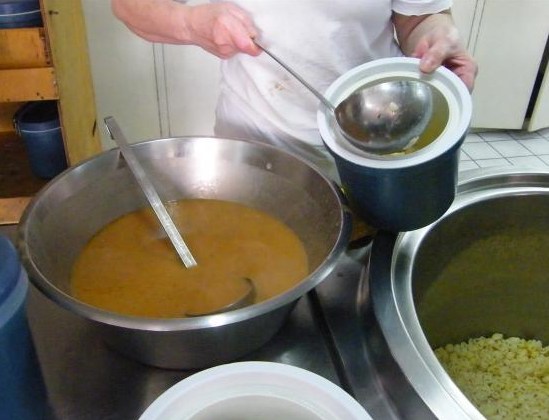 Given that the living conditions in which people live in Bosnia and Herzegovina are becoming increasingly difficult, and that unemployment and poverty prevail among the population, the number of socially vulnerable individuals and families without basic means of subsistence is increasing.

Through the realization of the projects of the Soup kitchen and “Meal on Wheels“, the Kruh sv. Ante has been providing food assistance to people in need for many years. We provide meals and dry food to our users through three soup kitchens, two of which are located in the Sarajevo Canton (Dobrinja and Grbavica), and the third in Vareš in the Zenica-Doboj Canton.

For the elderly and the sick, we deliver meals to their home address every day – “Food on wheels“.

Through our social office and through state social institutions, we reach out to beneficiaries and check their social status.

Users of the soup kitchens of St. Ante, in addition to being able to come for their meal, also have the opportunity to dine in the dining rooms. Here they meet people who are in the same situation, where there is mutual psychological support, which is very important for a person in need. There is an improvement in the quality of life of people who are in need.

SUPPORT FOR THE WORK OF SOUP KITCHENS

Soup kitchens in Sarajevo are partially supported by the Sarajevo Canton, and most of them are funded with the help of donors. The soup kitchen also feeds 112 students who live in the Franciscan student dormitory in Kovačići (Sarajevo).

God’s providence and human goodness will not allow the hungry to knock on our door in vain!

With your contribution, you can also provide basic help to people in need – food!